Battery Adapter for the

This battery adapter holds 10 each common "D" flashlight batteries.  The batteries can be Alkaline to provide the longest talk time, Ni-Cad or Ni-MH rechargeable for lower life cycle cost.

There are some plastic battery adapters on the used market that hold 10 "D" cells, but it's done using 3 strings of 3 cells and a lone single cell.  These adapters can NOT be used with the PRC-25 since they can not supply the needed 3 Volts.

This version of the 257477BA is a plug and play solution, no modifications of the radio or battery box are required as was the case with prior versions.

The -PP option adds a pair of Anderson Power Products PP15 "Power Pole" connectors.   The orientation of the Positive and Negative connectors is the one standardized by ARES.   This allows this battery adapter to be used to power equipment that runs on 10 to 15 Volts DC.  For more about vehicle voltages see "What's a 12 Volt battery".

I recently wanted to power a GPS receiver for 24 hours continuously that needed 9 to 32 Volts and it's internal battery would only last 6 hours.  So I soldered a cigarette lighter socket to one the 257477BA V7.2 Battery Adapters.  This worked great.

The photo on the left is shown with the Positive connector on the left to match the way it shown on the orientation web page. Some Battery options and weights including $/Watt Hour.

Showing the 257477BA with the PPCL Cable installed.  You can see that when the PPCL cable is unplugged the 257477BA can be used the same as one without the -PP option.  The Red Cap on the cigarette lighter socket is to keep it clean and to keep keep out coins or other stuff that could cause a short.  Note there is no fuse in the 257477BA.

For those who already have one of my 2577BA or 257477BA battery adapters there are a couple of adapter cables.  Note that the following two cables can be used with my adapter or with an actual battery like a BB-5598, BA-4386, or other PRC-77/PRC-25 battery to get to Power Pole or Cigarette Lighter connections.

The Optional 25-PP is a short cable with a PRC-25 Battery Plug on one end and a Power Pole connector pair on the other end.  Can be used in any of the PRC-25 type battery adapters and on actual batteries like the BA-5598 or any of the mil batteries that can power a PRC-25 or PRC-77.  Can also be used for charging the battery.  Use the PP-CLS cable above to get to Cigarette Lighter socket.


Has table showing resistance of complete 257477BA-PP with various types of "D" cells installed.  This allows predicting the output voltage given the load current.

The 257477BA has the following improvements to the 2577BA.  The 2577BA will still be offered since it has a lower price and works in the PRC-25 and PRC-77.  But the 2577BA requires removing the foam strips from the battery box.

This version uses a pair of 0.093" thick G10 fiberglass printed circuit boards for the plates instead of the plastic used on the standard 257477BA (Version 6.5).

The fiberglass is much stronger than the plastic used for the prior versions.  Printed circuit traces replace all of the between battery connections.

Charging these batteries took 6.64 AH.  It's typical that you need to put more charge into a battery than you take out of it. The efficiency of these batteries is 4.65/6.64 or about 70%.

Note that 9 AH Ni-MH batteries are available and they should last twice as long, or about 60 hours.

Operational with the following:


Will NOT work with the following:


Do not know about:

Internal Resistance of adapter loaded with 10 each D cells to follow and a comparison with stock and prototype narrow copper braid adapter shown below.

By warping solder wick (copper braid) around the small end of each spring where it contacts the bottom of the battery and soldering both ends to the wide printed circuit trace the spring resistance is paralleled with the copper braid resistance.  This lowers the total resistance of the pack and is helpful when currents over 1.5 amp are being drawn.  It will not make any noticeable improvement when the adapter is used in a PRC-25 or PRC-77 but will help in radios like the PRC-1099.

You might be able to pull 4 amps when Ni-MH cells are used instead of about 2 amps for a stock adapter.  Note that although Alkaline cells provide more voltage they are not capable of delivering as high a current as rechargeable cells.  An exception may be the Eveready brand that does have lower internal resistance than other Alkaline cells. 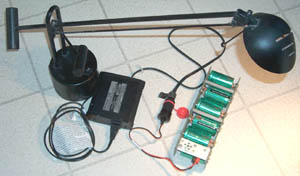 22 & 23 Sep 2007 - My wife needed to power a cordless phone, credit card verifier and desktop calculator where the AC mains power was out.  She used the 257477BA-PP that had been modified for high current use with an inverter and it worked well.  Since I don't have the items she was powering for demonstration I've connected a 50 watt desk lamp running on the high position.

Modern cars have "theft proof" radios, GPS, etc. with a blinking LED when the car power is off.  The idea is that if a thief removes the radio from the car it senses the loss of primary power and then requires a secret pass code to activate.  It can take many hours if this happens to you because your battery went dead (here's how I recovered the code once before).  The same problem will happen when you replace a bad battery.

Note: A bad battery does not have enough capacity to start the vehicle, but does have enough power to maintain the radio and GPS magic codes.  I'm guessing they convert the "12 Volt" supply to 5 Volts and that powers the logic needed, so even a very "dead" battery as far as starting is concerned will still maintain the radio codes.

The headache associated with getting the code number can be avoided if you supply the car with "12 Volts" while the battery is disconnected.  This can easily be done using the 257477BA-PP battery adapter with the Power Pole option and a Cigarette Lighter Plug to Power Pole cable.

1.    Try all the Cigarette Lighter Sockets on your car with the key removed to see if any of them are hot.  To do that plug the CLP-PP cable into each socket and see if the LED on the CLP turns on.  If none of them are hot with the key off then turn the key to the first position like used to listen to the radio with the engine off) and see if the LED now turns on.  The key needs to be in a position where the socket you are going to use is "hot" during the battery replacement.

2. Unplug the cable from the vehicle and connect the Power Pole end to the 257477BA-PP and confirm that the LED turns on.  If not, put fresh batteries in the battery adapter.

3. Now with the ignition key in a position that makes the socket "hot" use the cable to connect the battery adapter to the vehicle.

5. Remove the cable and battery adapter before starting the vehicle.
added Aug 14, 2013.  Worked on Honda when battery was replaced.

The 257477BA has two notches on the bottom to clear the cushions used in the CY-2562/PRC-25 battery box to support a BA-4386/PRC-25 or similar full size battery.  But some late model PRC-77 radios used the BA-5598/U half size battery and were fitted with four cushions.  The center two cushions are NOT compitible with the 257477BA and need to be removed.  If the outer two cushions are not fully in the battery adapter notches they need to be moved.